1.a surgical removal of all or part of a limb

2.a condition of disability resulting from the loss of one or more limbs

1.(MeSH)The removal of a limb or other appendage or outgrowth of the body. (Dorland, 28th ed)

AmputationAm`pu*ta"tion (�), n. [L. amputatio: cf. F. amputation.] The act of amputating; esp. the operation of cutting off a limb or projecting part of the body.

Amputation is the removal of a body extremity by trauma, prolonged constriction, or surgery. As a surgical measure, it is used to control pain or a disease process in the affected limb, such as malignancy or gangrene. In some cases, it is carried out on individuals as a preventative surgery for such problems. A special case is that of congenital amputation, a congenital disorder, where fetal limbs have been cut off by constrictive bands. In some countries, amputation of the hands, feet or other body parts is or was used as a form of punishment for people who committed crimes. Amputation has also been used as a tactic in war and acts of terrorism; it may also occur as a war injury. In some cultures and religions, minor amputations or mutilations are considered a ritual accomplishment. Unlike some non-mammalian animals (such as lizards that shed their tails, salamanders that can regrow many missing body parts, and hydras, flatworms, and starfish that can regrow entire bodies from small fragments), once removed, human extremities do not grow back, unlike portions of some organs, such as the liver. A transplant or a prosthesis are the only options for recovering the loss.

In the US, the majority of new amputations occur due to complications of the vascular system (the blood vessels), especially from diabetes. Between 1988 and 1996, there were an average of 133,735 hospital discharges for amputation per year in the US.[1]

Types of amputation include:

Genital modification and mutilation may involve amputating tissue, although not necessarily as a result of injury or disease.

As a rule, partial amputations are preferred to preserve joint function, but in oncological surgery, disarticulation is favored.[citation needed]

In some rare cases when a person has become trapped in a deserted place, with no means of communication or hope of rescue, the victim has amputated his or her own limb:

Even rarer are cases where self-amputation is performed for criminal or political purposes:

Body integrity identity disorder is a psychological condition in which an individual feels compelled to remove one or more of their body parts, usually a limb. In some cases, that individual may take drastic measures to remove the offending appendages, either by causing irreparable damage to the limb so that medical intervention cannot save the limb, or by causing the limb to be severed. 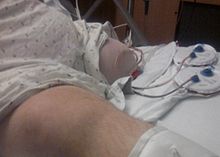 Transfemoral amputation due to liposarcoma

Curved knives such as this one were used, in the past, for some kinds of amputations.

The first step is ligating the supplying artery and vein, to prevent hemorrhage (bleeding). The muscles are transected, and finally the bone is sawed through with an oscillating saw. Sharp and rough edges of the bone(s) are filed down, skin and muscle flaps are then transposed over the stump, occasionally with the insertion of elements to attach a prosthesis.

Amputations are traumatic experiences that reduce the quality of life for patients in addition to being expensive. A typical prosthetic limb costs in the range of $10,000–15,000 according to the American Diabetic Association. Preventing amputations is a critical task.

Methods in preventing amputation depend on the problems that might cause amputations to be necessary. Chronic infections, often caused by diabetes or decubitus ulcers in bedridden patients, are common causes of infections that lead to gangrene, which would then necessitate amputation.

There are two key challenges: first, many patients have impaired circulation in their extremities, and second, they have difficulty curing infections in limbs with poor vasculation (blood circulation).

Crush injuries where there is extensive tissue damage and poor circulation also benefit from HBOT. The high level of oxygenation and revascularization speed up recovery times and prevent infections.

A study found that the patented method called Circulator Boot achieved significant results in prevention of amputation in patients of diabetes and arterioscleorosis.[14][15] Another study found it also effective for healing limb ulcers caused by peripheral vascular disease.[16] The boot checks the heart rhythm and compresses the limb between heartbeats; the compression helps cure the wounds in the walls of veins and arteries, and helps to push the blood back to the heart.[17]

For victims of trauma, advances in microsurgery in the 1970s have made replantations of severed body parts possible.

The individual may experience psychological trauma as well as emotional discomfort. The stump will remain an area of reduced mechanical stability. Limb loss can present significant or even drastic practical limitations.

A large proportion of amputees (50–80%) experience the phenomenon of phantom limbs;[18] they feel body parts that are no longer there. These limbs can itch, ache, burn, feel tense, dry or wet, locked in or trapped or they can feel as if they are moving. Some scientists believe it has to do with a kind of neural map that the brain has of the body, which sends information to the rest of the brain about limbs regardless of their existence. Phantom sensations and phantom pain may also occur after the removal of body parts other than the limbs, e.g. after amputation of the breast, extraction of a tooth (phantom tooth pain) or removal of an eye (phantom eye syndrome).

A similar phenomenon is unexplained sensation in a body part unrelated to the amputated limb. It has been hypothesized that the portion of the brain responsible for processing stimulation from amputated limbs, being deprived of input, expands into the surrounding brain, (Phantoms in the Brain: V. S. Ramachandran and Sandra Blakeslee) such that an individual who has had an arm amputated will experience unexplained pressure or movement on his face or head[citation needed].

In many cases, the phantom limb aids in adaptation to a prosthesis, as it permits the person to experience proprioception of the prosthetic limb. To support improved resistance or usability, comfort or healing, some type of stump socks may be worn instead of or as part of wearing a prosthesis.

Another side effect can be heterotopic ossification, especially when a bone injury is combined with a head injury. The brain signals the bone to grow instead of scar tissue to form, and nodules and other growth can interfere with prosthetics and sometimes require further operations. This type of injury has been especially common among soldiers wounded by improvised explosive devices in the Iraq war.[19]

Due to technologic advances in prosthetics, amputees can live active lives with little restriction. Organizations such as the Challenged Athletes Foundation have been developed to give amputees the opportunity to be involved in athletics and adaptive sports such as Amputee Soccer.

The word amputation is derived from the Latin amputare, "to cut away", from ambi- ("about", "around") and putare ("to prune"). The Latin word has never been recorded in a surgical context, being reserved to indicate punishment for criminals. The English word "amputation" was first applied to surgery in the 17th century, possibly first in Peter Lowe's A discourse of the Whole Art of Chirurgerie (published in either 1597 or 1612); his work was derived from 16th century French texts and early English writers also used the words "extirpation" (16th century French texts tended to use extirper), "disarticulation", and "dismemberment" (from the Old French desmembrer and a more common term before the 17th century for limb loss or removal), or simply "cutting", but by the end of the 17th century "amputation" had come to dominate as the accepted medical term.