1.larval salamander of mountain lakes of Mexico that usually lives without metamorphosing

1.(MeSH)A genus of the Ambystomatidae family. The best known species of this genus are the axolotl forms AMBYSTOMA MEXICANUM and Ambystoma tigrinum. They may retain gills and remain aquatic without developing all of the adult characteristics. However, under proper changes in the environment they metamorphose.

AxolotlAx"o*lotl (�), n. [The native name.] (Zoöl.) An amphibian of the salamander tribe found in the elevated lakes of Mexico; the siredon.

☞ When it breeds in captivity the young develop into true salamanders of the genus Amblystoma. This also occurs naturally under favorable conditions, in its native localities; although it commonly lives and breeds in a larval state, with persistent external gills. See Siredon.

/ˈæksəlɒtəl/; etymol. náhuatl axolotl — "water monster"), Ambystoma mexicanum, is a neotenic salamander, closely related to the Tiger Salamander. Larvae of this species fail to undergo metamorphosis, so the adults remain aquatic and gilled. It is also called ajolote (which is also a common name for different types of salamander).[1] The species originates from numerous lakes, such as Lake Xochimilco underlying Mexico City.[2] Axolotls are used extensively in scientific research due to their ability to regenerate limbs.

Axolotls should not be confused with waterdogs, the larval stage of the closely related Tiger Salamanders (Ambystoma tigrinum and Ambystoma mavortium), which are widespread in much of North America and also occasionally become neotenic, nor with mudpuppies (Necturus spp.), fully aquatic salamanders which are not closely related to the axolotl but bear a superficial resemblance.[1]

As of 2010[update], wild axolotls are near extinction[3] due to urbanization in Mexico City and polluted waters. Nonnative fish such as African tilapia and Asian carp have also recently been introduced to the waters. These new fish have been eating the axolotls' young, as well as its primary source of food.[4] The axolotl is currently on the International Union for Conservation of Nature's annual Red List of threatened species.[5] 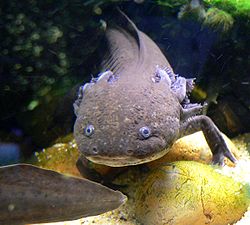 A sexually mature adult axolotl, at age 18–24 months, ranges in length from 15–45 cm (6–18 in), although a size close to 23 cm (9 in) is most common and greater than 30 cm (12 in) is rare. Axolotls possess features typical of salamander larvae, including external gills and a caudal fin extending from behind the head to the vent.[citation needed] Their heads are wide, and their eyes are lidless. Their limbs are underdeveloped and possess long, thin digits. Males are identified by their swollen cloacae lined with papillae, while females are noticeable for their wider bodies full of eggs. Three pairs of external gill stalks (rami) originate behind their heads and are used to move oxygenated water. The external gill rami are lined with filaments (fimbriae) to increase surface area for gas exchange.[citation needed] Four gill slits lined with gill rakers are hidden underneath the external gills. Axolotls have barely visible vestigial teeth, which would have developed during metamorphosis. The primary method of feeding is by suction, during which their rakers interlock to close the gill slits. External gills are used for respiration, although buccal pumping (gulping air from the surface) may also be used in order to provide oxygen to their lungs. Axolotls have four different colours, two naturally occurring colors and two mutants. The two naturally occurring colors are "wildtype" (varying shades of brown usually with spots) and melanoid (black). The two mutant colors are leucistic (pale pink with black eyes) and albino (golden, tan or pale pink with pink eyes).[citation needed]

The axolotl is only native to Lake Xochimilco and Lake Chalco in central Mexico. Unfortunately for the axolotl, Lake Chalco no longer exists as it was artificially drained to avoid periodic flooding, and Lake Xochimilco remains a diminished glimpse of its former self, existing mainly as canals. The water temperature in Xochimilco rarely rises above 20 °C (68 °F), though it may fall to 6 or 7 °C (45 °F) in the winter, and perhaps lower. The wild population has been put under heavy pressure by the growth of Mexico City.[5] Axolotls are also sold as food in Mexican markets and were a staple in the Aztec diet.[4] They are currently listed by CITES as an endangered species and by IUCN as critically endangered in the wild, with a decreasing population.

Axolotls are members of the Ambystoma tigrinum (Tiger salamander) complex, along with all other Mexican species of Ambystoma. Their habitat is like that of most neotenic species—a high altitude body of water surrounded by a risky terrestrial environment. These conditions are thought to favor neoteny. However, a terrestrial population of Mexican Tiger Salamanders occupies and breeds in the axolotl's habitat.

The axolotl is carnivorous, consuming small prey such as worms, insects, and small fish in the wild. Axolotls locate food by smell, and will "snap" at any potential meal, sucking the food into their stomachs with vacuum force.[citation needed]

Axolotls exhibit a property called neoteny, meaning that they reach sexual maturity without undergoing metamorphosis. Many species within the axolotl's genus are either entirely neotenic or have neotenic populations. In the axolotl, metamorphic failure is caused by a lack of thyroid stimulating hormone, which is used to induce the thyroid to produce thyroxine in transforming salamanders. The genes responsible for neoteny in laboratory animals may have been identified; however, they are not linked in wild populations, suggesting artificial selection is the cause of complete neoteny in laboratory and pet axolotls.[citation needed]

Unlike some other neotenic salamanders (Sirens and Necturus), axolotls can be induced to metamorphose by an injection of iodine (used in the production of thyroid hormones) or by shots of thyroxine hormone. Another method for inducing transformation, though one that is very rarely successful, involves removing an axolotl in good condition to a shallow tank in a vivarium and slowly reducing the water level so that the axolotl has difficulty submerging.[citation needed] It will then, over a period of weeks, slowly metamorphose into an adult salamander. During transformation, the air in the vivarium must remain moist, and the maturing axolotl sprayed with a fine mist of pure water. The odds of the animal being able to metamorphose via this method are extremely small, and most attempts at inducing metamorphosis lead to death.[citation needed] This is likely due to the strong genetic basis for neoteny in laboratory and pet axolotls, which means that few captive animals have the ability to metamorphose on their own. Artificial metamorphosis also dramatically shortens the axolotl's lifespan if it survives the process. A neotenic axolotl will live an average of 10–15 years (though an individual in Paris is credited with achieving 25 years), while a metamorphosed specimen will scarcely live past the age of five. The adult form resembles a terrestrial Mexican Tiger Salamander, but has several differences, such as longer toes, which support its status as a separate species.[citation needed]

Use as a model organism

Six adult axolotls (including a leucistic specimen) were shipped from Mexico City to the Jardin des Plantes in Paris in 1863. Unaware of their neoteny, Auguste Duméril was surprised when, instead of the axolotl, he found in the vivarium a new species, similar to the salamander. This discovery was the starting point of research about neoteny. It is not certain that Mexican Tiger Salamanders were not included in the original shipment.

Today, the axolotl is still used in research as a model organism, and large numbers are bred in captivity. Axolotls are especially easy to breed compared to other salamanders in their family, which are almost never captive bred due to the demands of terrestrial life. One attractive feature for research is the large and easily manipulated embryo, which allows viewing of the full development of a vertebrate. Axolotls are used in heart defect studies due to the presence of a mutant gene that causes heart failure in embryos. Since the embryos survive almost to hatching with no heart function, the defect is very observable. The presence of several color morphs has also been extensively studied.[citation needed]

The feature of the salamander that attracts most attention is its healing ability: the axolotl does not heal by scarring and is capable of the regeneration of entire lost appendages in a period of months, and, in certain cases, more vital structures. Some have indeed been found restoring the less vital parts of their brains. They can also readily accept transplants from other individuals, including eyes and parts of the brain—restoring these alien organs to full functionality. In some cases, axolotls have been known to repair a damaged limb as well as regenerating an additional one, ending up with an extra appendage that makes them attractive to pet owners as a novelty. In metamorphosed individuals, however, the ability to regenerate is greatly diminished. The axolotl is therefore used as a model for the development of limbs in vertebrates.[6] 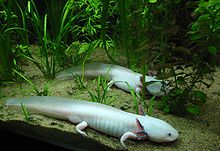 Axolotls live at temperatures of 12 °C (54 °F)-20 °C (68 °F), preferably 17 °C (63 °F)-18 °C (64 °F). As for all poikilothermic organisms, lower temperatures result in slower metabolism; higher temperatures can lead to stress and increased appetite. Chlorine, commonly added to tapwater, is harmful to axolotls. A single typical axolotl typically requires a 40 l (11 US gal) tank with a water depth of at least 15 cm (6 in). Axolotls spend a majority of the time at the bottom of the tank.[citation needed]

Salts, such as Holtfreter's solution, are usually added to the water to prevent infection.[7]

In captivity, axolotls eat a variety of readily available foods, including trout and salmon pellets, frozen or live bloodworms, earthworms, and waxworms. Axolotls can also eat feeder fish, but care should be taken as fish left in the tank may graze on the axolotls' exposed gills.[citation needed]

It should also be noted that Axolotls may suffer from impaction related issues if not kept on the correct substrate with fine sand being the preferred option. Impaction can be caused by the digestion of gravel and could be severe enough to cause death, therefore they must never be kept on gravel or stones that are smaller than the axolotls' head.

The Pokémon, Mudkip, is based on the axolotl.

Argentine author Julio Cortazar wrote a story titled "Axolotl"; in this story, a man develops a fascination with the axolotls in Paris' Jardin des Plantes and ultimately becomes one of them. The story appeared in his collection Final del Juego and has appeared in multiple anthologies.

The Wiktionary entry for axolotl