During his lifetime he was acclaimed for having delighted children worldwide, and was feted by royalty. His poetry and stories have been translated into more than 150 languages. They have inspired motion pictures, plays, ballets, and animated films.[1]

Hans Christian Andersen was born in the town of Odense, Denmark, on Tuesday, April 2, 1805. He was an only child. "Hans", "Christian" and "Andersen" were (and are) traditional and common Danish names.

Andersen's father, also Hans, considered himself related to nobility. His paternal grandmother had told his father that their family had in the past belonged to a higher social class, but investigations prove these stories unfounded. The family apparently was affiliated with Danish royalty, but through employment or trade. Today, speculation persists that Andersen may have been an illegitimate son of the royal family. In any case, King Frederick VI took a personal interest in him as a youth and paid for a part of his education.[2] According to writer Rolf Dorset, Andersen's ancestry remains indeterminate. Hans Christian was forced to support himself. He worked as a weaver's apprentice and, later, for a tailor. At 14, he moved to Copenhagen to seek employment as an actor. Having an excellent soprano voice, he was accepted into the Royal Danish Theatre, but his voice soon changed. A colleague at the theatre told him that he considered Andersen a poet. Taking the suggestion seriously, he began to focus on writing. 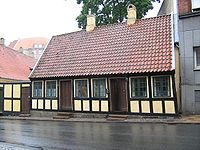 Jonas Collin, who, following a chance encounter with Andersen, immediately felt a great affection for him, sent him to a grammar school in Slagelse, covering all his expenses.[3] Andersen had already published his first story, The Ghost at Palnatoke's Grave, in 1822. Though not a keen student, he also attended school at Elsinore until 1827.[4]

He later said his years in school were the darkest and most bitter of his life. At one school, he lived at his schoolmaster's home. There he was abused in order "to improve his character", he was told. He later said the faculty had discouraged him from writing in general, causing him to enter a state of depression. 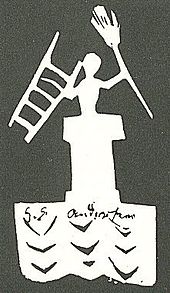 In 1829, Andersen enjoyed considerable success with a short story titled "A Journey on Foot from Holmen's Canal to the East Point of Amager". He also published a comedy and a collection of poems that season. Though he made little progress writing and publishing immediately thereafter, in 1833 he received a small traveling grant from the King, enabling him to set out on the first of many journeys through Europe. At Jura, near Le Locle, Switzerland, he wrote the story, "Agnete and the Merman". He spent an evening in the Italian seaside village of Sestri Levante the same year, inspiring the name, The Bay of Fables. (An annual festival celebrates his visit.[5]) In October, 1834, he arrived in Rome. Andersen's first novel, "The Improvisatore", was published at the beginning of 1835, becoming an instant success. During these traveling years, Hans Christian Andersen lived in an apartment at number 20, Nyhavn, Copenhagen. There, a memorial plaque was unveiled on May 8, 1935, a gift by Peter Schannong.[6]

It was during 1835 that Andersen published the first installment of his immortal Fairy Tales (Danish: '´'Eventyr). More stories, completing the first volume, were published in 1836 and 1837. The quality of these stories was not immediately recognized, and they sold poorly. At the same time, Andersen enjoyed more success with two novels O.T. (1836) and Only a Fiddler. 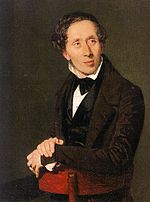 After a visit to Sweden in 1837, Andersen became inspired by Scandinavism and committed himself to writing a poem to convey his feeling of relatedness between the Swedes, the Danes and the Norwegians.[7] It was in July 1839 during a visit to the island of Funen that Andersen first wrote the text of his poem Jeg er en Skandinav (I am a Scandinavian).[7] Andersen designed the poem to capture "the beauty of the Nordic spirit, the way the three sister nations have gradually grown together" as part of a Scandinavian national anthem.[7] Composer Otto Lindblad set the poem to music and the composition was published in January 1840. Its popularity peaked in 1845, after which it was seldom sung.[7] Andersen spent 2 weeks at the Augustenborg Palace in the autumn of 1844.[8]

In 1851, he published to wide acclaim In Sweden, a volume of travel sketches. A keen traveler, Andersen published several other long travelogues: Shadow Pictures of a Journey to the Harz, Swiss Saxony, etc. etc. in the Summer of 1831 (A Poet's Bazaar (560), In Spain, and A Visit to Portugal in 1866 (The latter describes his visit with his Portuguese friends Jorge and Jose O'Neill, who were his fellows in the mid 1820s while living in Copenhagen.) In his travelogues, Andersen took heed of some of the contemporary conventions about travel writing; but always developed the genre to suit his own purposes. Each of his travelogues combines documentary and descriptive accounts of the sights he saw with more philosophical excurses on topics such as being an author, immortality, and the nature of fiction in the literary travel report. Some of the travelogues, such as In Sweden, even contain fairy-tales.

In the 1840s Andersen's attention returned to the stage, however with no great success at all. His true genius was however proved in the miscellany the Picture-Book without Pictures (1840). The fame of his fairy tales had grown steadily; a second series began in 1838 and a third in 1845. Andersen was now celebrated throughout Europe, although his native Denmark still showed some resistance to his pretensions. Between 1845 and 1864, H. C. Andersen lived in 67, Nyhavn, Copenhagen, where a memorial plaque is placed.[6]

In June 1847, Andersen paid his first visit to Britain and enjoyed a triumphal social success during the summer. The Countess of Blessington invited him to her parties where intellectual and famous people could meet, and it was at one party that he met Charles Dickens for the first time. They shook hands and walked to the veranda which was of much joy to Andersen. He wrote in his diary, "We had come to the veranda, I was so happy to see and speak to England's now living writer, whom I love the most."[9]

Ten years later, Andersen visited Britain again, primarily to visit Dickens. He extended a brief visit to Dickens' home into five weeks, to the distress of Dickens' family. Dickens stopped all correspondence between them, after the disastrous stay, much to the great disappointment and confusion of Andersen, who had quite enjoyed the visit, and never understood why his letters went unanswered.[9] 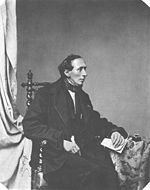 In Andersen's early life, his private journal records his refusal to have sexual relations.[10][11]

Andersen often fell in love with unattainable women and many of his stories are interpreted as references to his sexual grief.[12] At one point he wrote in his diary: "Almighty God, thee only have I; thou steerest my fate, I must give myself up to thee! Give me a livelihood! Give me a bride! My blood wants love, as my heart does!"[13] A girl named Riborg Voigt was the unrequited love of Andersen's youth. A small pouch containing a long letter from Riborg was found on Andersen's chest when he died, several decades after he first fell in love with her, and after he supposely fell in love with others. Other disappointments in love included Sophie Ørsted, the daughter of the physicist Hans Christian Ørsted, and Louise Collin, the youngest daughter of his benefactor Jonas Collin. The most famous of these was the opera soprano Jenny Lind. One of his stories, "The Nightingale", was a written expression of his passion for Lind, and became the inspiration for her nickname, the "Swedish Nightingale". Andersen was often shy around women and had extreme difficulty in proposing to Lind. When Lind was boarding a train to take her to an opera concert, Andersen gave Lind a letter of proposal. Her feelings towards him were not the same; she saw him as a brother, writing to him in 1844 "farewell... God bless and protect my brother is the sincere wish of his affectionate sister, Jenny."[14]

Just as with his interest in women, Andersen would become attracted to nonreciprocating men. For example, Andersen wrote to Edvard Collin:[15] "I languish for you as for a pretty Calabrian wench... my sentiments for you are those of a woman. The femininity of my nature and our friendship must remain a mystery." Collin, who only preferred women, wrote in his own memoir: "I found myself unable to respond to this love, and this caused the author much suffering." Likewise, the infatuations of the author for the Danish dancer Harald Scharff[16] and Carl Alexander, the young hereditary duke of Saxe-Weimar-Eisenach,[17] did not result in any relationships.

In recent times some literary studies have speculated about the homoerotic camouflage in Andersen's works.[18]

In the spring of 1872, Andersen fell out of his bed and was severely hurt. He never fully recovered, but he lived until August 4, 1875, dying of insidious causes in a house called Rolighed (literally: calmness), near Copenhagen, the home of his close friends, the banker Moritz Melchior and his wife.[19] Shortly before his death, he had consulted a composer about the music for his funeral, saying: "Most of the people who will walk after me will be children, so make the beat keep time with little steps."[19] His body was interred in the Assistens Kirkegård in the Nørrebro area of Copenhagen.

At the time of his death, he was an internationally renowned and treasured artist. He received a stipend from the Danish Government as a "national treasure". Before his death, steps were already underway to erect the large statue in his honor, which was completed and is prominently placed in Rosenborg Garden ("Kongens Have", sculptor A.V. Saabye, 1880) in Copenhagen.[1] 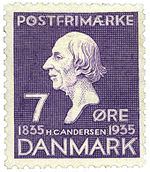 In the English-speaking world, stories such as "Thumbelina", "The Snow Queen", "The Little Match Girl", "The Ugly Duckling", "The Little Mermaid", "The Emperor's New Clothes", "The Steadfast Tin Soldier", and "The Princess and the Pea" remain popular and are widely read. "The Emperor's New Clothes" and "The Ugly Duckling" have both passed into the English language as well-known expressions.

In the Copenhagen harbor there is a statue of The Little Mermaid, placed in honor of Hans Christian Andersen. April 2, Andersen's birthday, is celebrated as International Children's Book Day. The year 2005 was the bicentenary of Andersen's birth and his life and work was celebrated around the world.

In the United States, statues of Hans Christian Andersen may be found in Central Park, New York, Chicago's Lincoln Park and in Solvang, California. The Library of Congress Rare Book and Special Collections Division holds a unique collection of Andersen materials bequeathed by the Danish-American actor Jean Hersholt.[20] Of particular note is an original scrapbook Andersen prepared for the young Jonas Drewsen.[21]

The city of Bratislava, Slovakia features a statue of Hans Christian Andersen in memory of his visit in 1841.[22]

The city of Funabashi, Japan has a children's theme park named after Hans Christian Andersen.[23]

The city of Malaga, Spain has a statue of Hans Christian Andersen.

In the city of Lublin, Poland is the Puppet & Actor Theatre of Hans Christian Andersen.[24]

A $13-million theme park based on Andersen's tales and life opened in Shanghai at the end of 2006. Multi-media games as well as all kinds of cultural contests related to the fairy tales are available to visitors. He was chosen as the star of the park because he is a "nice, hardworking person who was not afraid of poverty", Shanghai Gujin Investment general manager Zhai Shiqiang was quoted by the AFP news agency as saying.[25]

Some of his most famous fairy tales include:

Contemporary literary and artistic works inspired by Andersen's stories include: