1.the activity of laughing; the manifestation of joy or mirth or scorn"he enjoyed the laughter of the crowd"

2.the sound of laughing

1.(MeSH)An involuntary expression of merriment and pleasure; it includes the patterned motor responses as well as the inarticulate vocalization.

LaughterLaugh"ter (?), n. [AS. hleahtor; akin to OHG. hlahtar, G. gelächter, Icel. hlātr, Dan. latter. See Laugh, v. i. ] A movement (usually involuntary) of the muscles of the face, particularly of the lips, with a peculiar expression of the eyes, indicating merriment, satisfaction, or derision, and usually attended by a sonorous and interrupted expulsion of air from the lungs. See Laugh, v. i.

The act of laughter, which is a sweet contraction of the muscles of the face, and a pleasant agitation of the vocal organs, is not merely, or totally within the jurisdiction of ourselves. Sir T. Browne.

Archly the maiden smiled, and with eyes overrunning with laughter. Longfellow. 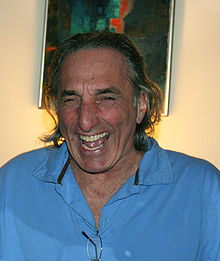 Laughing is a reaction to certain stimuli. It may ensue from hearing a joke, being tickled, or other stimuli. Most commonly, it is considered a visual expression of a number of positive emotional states, such as joy, mirth, happiness, relief, etc. However on some occasions it may express other emotions, such as embarrassment, apology or confusion ("nervous laughter)" or courtesy laugh.

Laughter is a part of human behavior regulated by the brain, helping humans clarify their intentions in social interaction and providing an emotional context to conversations. Laughter is used as a signal for being part of a group — it signals acceptance and positive interactions with others. Laughter is sometimes seen as contagious, and the laughter of one person can itself provoke laughter from others as a positive feedback.[1] This may account in part for the popularity of laugh tracks in situation comedy television shows.

Laughter is anatomically mediated by the epiglottis constricting the larynx.

The study of humor and laughter, and its psychological and physiological effects on the human body, is called gelotology. 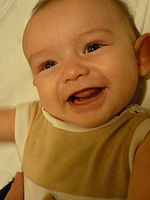 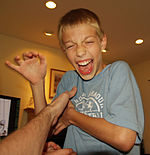 Laughter is a common response to tickling

Children are known to laugh a great deal more than adults: an average baby laughs around 300 times a day compared to an average adult, who laughs around 20 times a day; however this can depend on a person's personality. According to some studies, the onset of adulthood causes a gradual change characterized by increased seriousness and a diminished engagement in laughter.[2] Laughter is an audible expression or appearance of excitement, an inward feeling of joy. It may ensue from jokes, tickling, and other stimuli. Researchers have shown infants as early as 17 days old have vocal laughing sounds or laughter.[3] It conflicts with earlier studies indicating that infants usually start to laugh at about four months of age. Laughter researcher Robert Provine said: "Laughter is a mechanism everyone has; laughter is part of universal human vocabulary. There are thousands of languages, hundreds of thousands of dialects, but everyone speaks laughter in pretty much the same way.” Babies have the ability to laugh before they ever speak. Children who are born blind and deaf still retain the ability to laugh.[citation needed]

Provine argues that “Laughter is primitive, an unconscious vocalization.” Provine argues that it probably is genetic. In a study of the “Giggle Twins”, two happy twins who were separated at birth and only reunited 43 years later, Provine reports that “until they met each other, neither of these exceptionally happy ladies had known anyone who laughed as much as they did.” They reported this even though they both had been brought together by their adoptive parents, who they indicated were “undemonstrative and dour.” He indicates that the twins “inherited some aspects of their laugh sound and pattern, readiness to laugh, and maybe even taste in humor.”[4]

Norman Cousins developed a recovery program incorporating megadoses of Vitamin C, along with a positive attitude, love, faith, hope, and laughter induced by Marx Brothers films. "I made the joyous discovery that ten minutes of genuine belly laughter had an anesthetic effect and would give me at least two hours of pain-free sleep," he reported. "When the pain-killing effect of the laughter wore off, we would switch on the motion picture projector again and not infrequently, it would lead to another pain-free interval."[5][6]

Scientists have noted the similarity in forms of laughter induced by tickling among various primates, which suggests that laughter derives from a common origin among primate species.[7][8]

A very rare neurological condition has been observed whereby the sufferer is unable to laugh out loud, a condition known as aphonogelia.[9]

Laughter and the brain

The December 7, 1984, Journal of the American Medical Association describes the neurological causes of laughter as follows:

"Although there is no known 'laugh center' in the brain, its neural mechanism has been the subject of much, albeit inconclusive, speculation. It is evident that its expression depends on neural paths arising in close association with the telencephalic and diencephalic centers concerned with respiration. Wilson considered the mechanism to be in the region of the mesial thalamus, hypothalamus, and subthalamus. Kelly and co-workers, in turn, postulated that the tegmentum near the periaqueductal grey contains the integrating mechanism for emotional expression. Thus, supranuclear pathways, including those from the limbic system that Papez hypothesised to mediate emotional expressions such as laughter, probably come into synaptic relation in the reticular core of the brain stem. So while purely emotional responses such as laughter are mediated by subcortical structures, especially the hypothalamus, and are stereotyped, the cerebral cortex can modulate or suppress them."

A link between laughter and healthy function of blood vessels was first reported in 2005 by researchers at the University of Maryland Medical Center with the fact that laughter causes the dilatation of the inner lining of blood vessels, the endothelium, and increases blood flow.[12] Drs. Michael Miller (University of Maryland) and William Fry (Stanford), theorize that beta-endorphin like compounds released by the hypothalamus activate receptors on the endothelial surface to release nitric oxide, thereby resulting in dilation of vessels. Other cardioprotective properties of nitric oxide include reduction of inflammation and decreased platelet aggregation.[13][14]

Laughter has also been shown to have beneficial effects on various other aspects of biochemistry. For example, laughter has been shown to lead to reductions in stress hormones such as cortisol and epinephrine. When laughing the brain also releases endorphins that can relieve some physical pain.[15] Laughter also boosts the number of antibody-producing cells and enhances the effectiveness of T-cells, leading to a stronger immune system.[16] 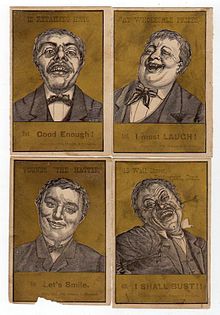 Common causes for laughter are sensations of joy and humor; however, other situations may cause laughter as well.

Philosopher John Morreall theorizes that human laughter may have its biological origins as a kind of shared expression of relief at the passing of danger. Friedrich Nietzsche, by contrast, suggested laughter to be a reaction to the sense of existential loneliness and mortality that only humans feel.

For example: a joke creates an inconsistency and the audience automatically try to understand what the inconsistency means; if they are successful in solving this 'cognitive riddle' and they realize that the surprise was not dangerous, they laugh with relief. Otherwise, if the inconsistency is not resolved, there is no laugh, as Mack Sennett pointed out: "when the audience is confused, it doesn't laugh". This is one of the basic laws of a comedian, referred to "exactness". It is important to note that sometimes the inconsistency may be resolved and there may still be no laugh. Because laughter is a social mechanism, an audience may not feel as if they are in danger, and the laugh may not occur. In addition, the extent of the inconsistency (and aspects of it timing and rhythm) has to do with the amount of danger the audience feels, and how hard or long they laugh. This explanation is confirmed by modern neurophysiology in the study of laughter and the brain.

Laughter can also be brought on by tickling. Although most people find it unpleasant, being tickled often causes heavy laughter, thought to be an (often uncontrollable) reflex of the body.[18][19] 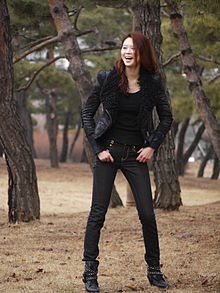 A normal laugh has the structure of “ha-ha-ha” or “ho-ho-ho.” It is unnatural, and one is physically unable to have a laugh structure of “ha-ho-ha-ho.” The usual variations of a laugh most often occur in the first or final note in a sequence- therefore, “ho-ha-ha” or “ha-ha-ho” laughs are possible. Normal note durations with unusually long or short “inter-note intervals” do not happen due to the result of the limitations of our vocal cords. This basic structure allows one to recognize a laugh despite individual variants.[20]

It has also been determined that eyes moisten during laughter as a reflex from the tear glands.[16]

Laughter is not always a pleasant experience and is associated with several negative phenomena. Excessive laughter can lead to cataplexy, and unpleasant laughter “spells”, excessive elation, and fits of laughter can all be considered negative aspects of laughter. Unpleasant laughter spells, or “sham mirth,” usually occur in people who have a neurological condition; including patients with pseudobulbar palsy, multiple sclerosis and Parkinson’s disease. These patients appear to be laughing out of amusement but report that they are feeling undesirable sensations “at the time of the punch line". Excessive elation is a common symptom associated with manic-depressive psychoses and mania/hypomania. Those who suffer from schizophrenic psychoses seem to suffer the opposite- they do not understand humor or get any joy out of it. A fit describes an abnormal time when one cannot control the laughter or one’s body- sometimes leading to seizures or a brief period of unconsciousness. Some believe that fits of laughter represent a form of epilepsy.[21]