1.in some classification includes Viscaceae: parasitic or hemiparasitic shrublets or shrubs or small trees of tropical and temperate regions; attach to hosts by haustoria

2.(MeSH)The showy mistletoe plant family of the order Santalales, subclass Rosidae, class Magnoliopsida. This includes parasitic tropical plants with haustoria connecting to the hosts. The leaves are opposite and thick. The flowers (4-7) have both calyx and corolla. The fruit is a berry with one seed. 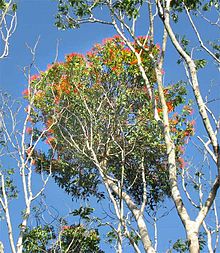 Psittacanthus flowering atop a tree

Loranthaceae is a family of flowering plants, which has been universally recognized by taxonomists. It consists of about 75 genera and 1,000 species of woody plants, many of them hemi-parasites, all of them except three having the mistletoe habit. The three terrestrial species are Nuytsia floribunda - the Western Australian Christmas tree, Atkinsonia ligustrina - a rare shrub of the Blue Mountains of Australia, and the Central to South American species of Gaiadendron punctatum.

Originally Loranthaceae contained all mistletoe species, but the typical Christmas mistletoes of Europe and North America (the genera Viscum and Phoradendron) belong to the family Santalaceae; previously these two genera and their closest relatives were in a separate family, Viscaceae, which has been merged into Santalaceae.

The APG II system (2003; unchanged from the APG system of 1998) assigns the family to the order Santalales in the clade core eudicots.