The wavefronts of a plane wave traveling in 3-space

In the physics of wave propagation, a plane wave (also spelled planewave) is a constant-frequency wave whose wavefronts (surfaces of constant phase) are infinite parallel planes of constant peak-to-peak amplitude normal to the phase velocity vector.

It is not possible in practice to have a true plane wave; only a plane wave of infinite extent will propagate as a plane wave. However, many waves are approximately plane waves in a localized region of space. For example, a localized source such as an antenna produces a field that is approximately a plane wave far from the antenna in its far-field region. Similarly, if the length scales are much longer than the wave’s wavelength, as is often the case for light in the field of optics, one can treat the waves as light rays which correspond locally to plane waves.

At time equals zero a positive phase shift results in the wave being shifted toward the left.

As t increases the wave travels to the right and the value at a given point x oscillates sinusoidally.

Animation of a 3D plane wave

Two functions that meet the above criteria of having a constant frequency and constant amplitude are the sine and cosine functions. One of the simplest ways to use such a sinusoid involves defining it along the direction of the x-axis. The equation below, which is illustrated toward the right, uses the cosine function to represent a plane wave travelling in the positive x direction.

In the above equation:

Other formalisms which directly use the wave’s wavelength

A more generalized form is used to describe a plane wave traveling in an arbitrary direction. It uses vectors in combination with the vector dot product.

Many choose to use a more mathematically versatile formulation that utilizes the complex number plane. It requires the use of the natural exponent

and the imaginary number

To appreciate this equation’s relationship to the earlier ones, below is this same equation expressed using sines and cosines. Observe that the first term equals the real form of the plane wave just discussed.

in place of the real valued amplitude

.
Specifically, since the complex form…

one can absorb the phase factor

into a complex amplitude by letting

, resulting in the more compact equation

While the complex form has an imaginary component, after the necessary calculations are performed in the complex plane, its real value can be extracted giving a real valued equation representing an actual plane wave.

Additionally, when using Fourier analysis techniques for waves in a lossy medium, the resulting attenuation is easier to deal with using complex Fourier coefficients. It should be noted however that if a wave is traveling through a lossy medium, the amplitude of the wave is no longer constant and therefore the wave is strictly speaking is no longer a true plane wave.

In quantum mechanics the solutions of the Schrödinger wave equation are by their very nature complex and in the simplest instance take a form identical to the complex plane wave representation above. The imaginary component in that instance however has not been introduced for the purpose of mathematical expediency but is in fact an inherent part of the “wave”.

These waves are solutions for a scalar wave equation in a homogeneous medium. For vector wave equations, such as the ones describing electromagnetic radiation or waves in an elastic solid, the solution for a homogeneous medium is similar: the scalar amplitude Ao is replaced by a constant vector Ao. For example, in electromagnetism Ao is typically the vector for the electric field, magnetic field, or vector potential. A transverse wave is one in which the amplitude vector is orthogonal to k, which is the case for electromagnetic waves in an isotropic medium. By contrast, a longitudinal wave is one in which the amplitude vector is parallel to k, such as for acoustic waves in a gas or fluid.

The plane-wave equation works for arbitrary combinations of ω and k, but any real physical medium will only allow such waves to propagate for those combinations of ω and k that satisfy the dispersion relation of the medium. The dispersion relation is often expressed as a function, ω(k). The ratio ω/|k| gives the magnitude of the phase velocity and dω/dk gives the group velocity. For electromagnetism in an isotropic medium with index of refraction n, the phase velocity is c/n, which equals the group velocity if the index is not frequency-dependent.

In linear uniform media, a wave solution can be expressed as a superposition of plane waves. This approach is known as the Angular spectrum method. The form of the planewave solution is actually a general consequence of translational symmetry. More generally, for periodic structures having discrete translational symmetry, the solutions take the form of Bloch waves, most famously in crystalline atomic materials but also in photonic crystals and other periodic wave equations. As another generalization, for structures that are only uniform along one direction x (such as a waveguide along the x direction), the solutions (waveguide modes) are of the form exp[i(kx-ωt)] multiplied by some amplitude function a(y,z). This is a special case of a separable partial differential equation.

The term is used in the same way for telecommunication, e.g. in Federal Standard 1037C and MIL-STD-188. 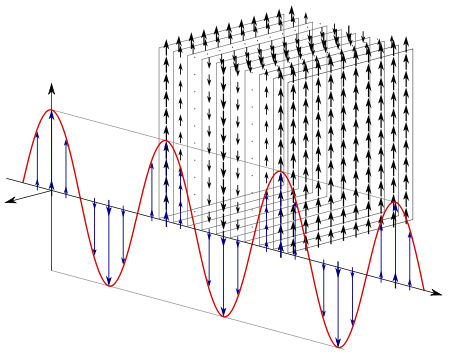 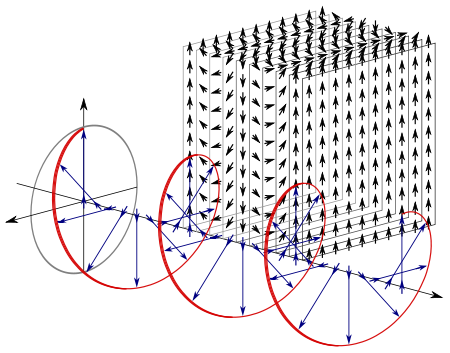 Circularly polarized light.
The blocks of vectors represent how the magnitude and direction of the electric field is constant for an entire plane perpendicular to the direction of travel.

Represented in the first illustration toward the right is a linearly polarized, electromagnetic wave. Because this is a plane wave, each blue vector, indicating the perpendicular displacement from a point on the axis out to the sine wave, represents the magnitude and direction of the electric field for an entire plane that is perpendicular to the axis.

Represented in the second illustration is a circularly polarized, electromagnetic plane wave. Each blue vector indicating the perpendicular displacement from a point on the axis out to the helix, also represents the magnitude and direction of the electric field for an entire plane perpendicular to the axis.

In the case of the linearly polarized light, the field strength from plane to plane varies from a maximum in one direction, down to zero, and then back up to a maximum in the opposite direction.

In the case of the circularly polarized light, the field strength remains constant from plane to plane but its direction steadily changes in a rotary type manner.

Not indicated in either illustration is the electric field’s corresponding magnetic field which is proportional in strength to the electric field at each point in space but is at a right angle to it. Illustrations of the magnetic field vectors would be virtually identical to these except all the vectors would be rotated 90 degrees perpendicular to the direction of propagation.