This article is about the region of Germany. For the soda fountain and Hollywood pharmacy, see Schwab's Pharmacy. For the administrative region (Regierungsbezirk) of Bavaria, see Bavarian Swabia. 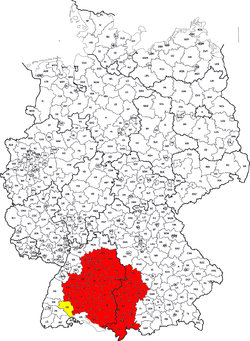 modern borders of Swabia inside Germany 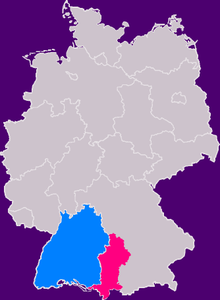 Like many cultural regions of Europe, Swabia's borders are not clearly defined. However, today it is normally thought of as comprising the former German state of Württemberg (with the Prussian Hohenzollern Province) and the administrative region of Bavarian Swabia.

In the Middle Ages, the term Swabia indicated a larger area, covering all the lands associated with the Frankish stem duchy of Alamannia stretching from the Vosges Mountains in the west to the broad Lech river in the east: This also included the region of Alsace and the later Margraviate of Baden on both sides of the Upper Rhine Valley, as well as modern German-speaking Switzerland, the Austrian state of Vorarlberg and the Principality of Liechtenstein in the south. 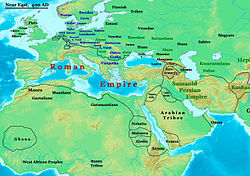 Europe in 400 AD, showing the Suebi in Swabia and their neighbours.

2,000 years ago, the Suebi or Suevi were an Elbe Germanic tribe whose origin was near the Baltic Sea, which was thus known to the Romans as the Mare Suebicum (today, the term "Swabian Sea" is applied to Lake Constance). They migrated to the southwest, becoming part of the Alamannic confederacy. The Alamanni were ruled by independent kings throughout the 4th and 5th centuries. Also, a number of Suevi (20,000-50,000[1]) reached the Iberian Peninsula under king Hermeric and established an independent kingdom in 410 in what is now northern Portugal, Galicia, and western regions of Asturias and most of León (in northwest Spain). Their kingdom was known as Galliciense Regnum and endured until 585. Its political center was Braccara Augusta (present-day Braga, Portugal).

Main articles: Alamannia, Duchy of Swabia, and Dukes of Swabia 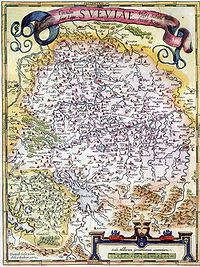 Map of the Swabian Circle 1572

Swabia became a duchy under the Frankish Empire in 496, following the Battle of Tolbiac. Swabia was one of the original stem duchies of East Francia, the later Holy Roman Empire, as it developed in the 9th and 10th centuries. The Hohenstaufen dynasty (the dynasty of Frederick Barbarossa), which ruled the Holy Roman Empire in the 12th and 13th centuries, arose out of Swabia, but following the execution of Conradin, the last Hohenstaufen, on October 29, 1268, the original duchy gradually broke up into many smaller units.

Charlemagne's family is known to have hailed from Swabia. The major dynasties that arose out of the region were the Habsburgs and the Hohenzollerns, who rose to prominence in Northern Germany. Also stemming from Swabia are the local dynasties of the Dukes of Württemberg and the Margraves of Baden. The Welf family went on to rule in Bavaria and Hanover, and are ancestral to the British royal family that has ruled since 1714. Smaller feudal dynasties eventually disappeared, however; for example, branches of the Montforts and Hohenems lived until modern times, and the Fürstenberg survive still. The region proved to be one of the most divided in the Empire, containing, in addition to these principalities, numerous free cities, ecclesiastical territories, and fiefdoms of lesser counts and knights.

The Old Swiss Confederacy was de facto independent from Swabia from 1499 as a result of the Swabian War.

Fearing the power of the greater princes, the cities and smaller secular rulers of Swabia joined to form the Swabian League in the 15th century. The League was quite successful, notably expelling the Duke of Württemberg in 1519 and putting in his place a Habsburg governor, but the league broke up a few years later over religious differences inspired by the Reformation, and the Duke of Württemberg was soon restored. 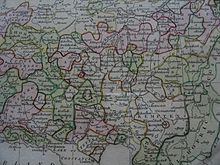 The region was quite divided by the Reformation. While secular princes like the Duke of Württemberg and the Margrave of Baden-Durlach, as well as most of the Free Cities, became Protestant, the ecclesiastical territories (including the bishoprics of Augsburg, Konstanz and the numerous Imperial abbeys) remained Catholic, as did the territories belonging to the Habsburgs (Further Austria), Hohenzollerns and the Margrave of Baden-Baden.

In the wake of the territorial reorganization of the Empire of 1803 by the Reichsdeputationshauptschluss, the shape of Swabia was entirely changed. All the ecclesiastical estates were secularized, and most of the smaller secular states, and almost all of the free cities, were mediatized, leaving only Württemberg, Baden and Hohenzollern as sovereign states. Much of Eastern Swabia became part of Bavaria, forming what is now the Swabian administrative region of Bavaria.

The Nazi propaganda film Jud Süß took place in the Kingdom of Württemberg, with the Swabians being terrorized by Jews.

Outside of Germany, many Swabians settled in Hungary, including part of what is now Serbia; and Romania (the Danube Swabians and Swabian Turkey) in the 18th century, where they were invited as pioneers to repopulate some areas. They also settled in Russia, Bessarabia, and Kazakhstan. They were well-respected as farmers. Outside of Europe, Swabian settlements can also be found in Brazil, Canada, and the United States. The town of Swaffham, Norfolk, means "homestead of the Swabians", some of whom must presumably have settled[citation needed] in England alongside the Angles and Saxons. Among the Germans who emigrated to the United States in the 19th century, Swabians in some areas maintained their regional identity and formed organizations for mutual support.[2]. Almost all of the several million Swabians were expelled from Hungary, Romania, and Yugoslavia during the period 1944-1950, as part of the ethnic cleansing against their German minorities which in large numbers took part in Nazi Party and in Hitler's army, like notorious 7th SS Volunteer Mountain Division Prinz Eugen and the like.

In several languages of eastern and south-eastern Europe, the local name for "Swabian" has come to be used as a colloquial name for "Germans" in general.

A campaign sticker, translated, "We can do everything—except speak Standard German." This is an allusion to the fact that Baden-Württemberg is one of the principal centres for innovation and industrial production in Germany with many inhabitants having distinctive dialects.

In the past, Swabians were the target of many jokes and stories where they are depicted as excessively stingy, overly serious, prudish, or as simpletons, for instance in "The Seven Swabians" (Die sieben Schwaben) published in Kinder- und Hausmärchen by the Brothers Grimm. However, this has ceased to a large extent, while Swabians are nowadays said to be frugal, clever, entrepreneurial and hard-working. In a widely respected publicity campaign on the occasion of the 50th anniversary of Baden-Württemberg, economically the most successful state in modern Germany, the Swabians famously replied to the former jokes with: "We can do everything—except speak Standard German" (Wir können alles. Außer Hochdeutsch), alluding to the region's distinct local dialect.

Many Swabian surnames end with the suffixes -le, -el, -ehl, and -lin. Examples would be: Schäuble, Egeler, Rommel, and Gmelin. The popular surname Schwab is derived from this area, meaning literally "Swabian".

In Switzerland, "Sauschwab" is a derogatory term for Germans, derived from the Swabian War of 1499. In Macedonian, Polish, and Bulgarian, "Shvab" or "Szwab" may be a pejorative term for any German, not just one from Swabia. In parts of the former Yugoslavia (i.e., Serbia, Montenegro, Slovenia, Croatia, Bosnia and Herzegovina), the more neutral term Švabo is somewhat applied to all German peoples who lived in those regions until shortly after World War II (called Danube Swabians though most of them came from neighboring Lorraine and the Palatinate), and to their descendants; it is even occasionally used as a slang term to refer to all Germans including Austrians and Swiss Germans. Also, is it frequently used as a derogatory term for all Germans. 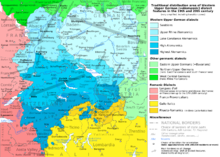 The following is an abbreviated list of individuals who hailed from the region. Inclusion in this list is not indicative of descent from the original Swabians.