This article refers to underwater diving by humans. For other uses of the term diving, see dive (disambiguation) and diving

Signal flag A(Alpha) - "I have a diver down - Keep clear"

Underwater diving is the practice of going underwater, either with breathing apparatus (scuba diving and surface supplied diving) or by breath-holding (free-diving).

Levels of training and types of equipment and breathing gases used differ between types of diving.

Underwater diving for commercial, rather than recreational purposes may have begun in Ancient Greece, since both Plato and Homer mention the sponge as being used for bathing. The island of Kalymnos was a main centre of diving for sponges. By using weights of as much as 15 kilograms (33 lb) to speed the descent, breath-holding divers would descend to depths up to 30 metres (98 ft) for as much as 5 minutes to collect sponges.[1]

The ability to dive and swim underwater can be a useful emergency skill, and is an important part of watersport and navy safety training. More generally, entering water from a height is an enjoyable leisure activity, as is underwater swimming with or without breathing apparatus.

The addition of a short breathing tube (snorkel) allows the diver to breathe while remaining immersed, but close to the surface.

Breathing systems consist of one or more diving cylinders containing breathing gas at high pressure connected to a diving regulator. 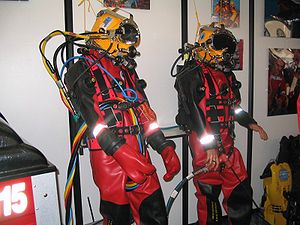 An alternative to self contained breathing systems is to supply breathing gases from the surface. An umbilical hose, or hoses, from the surface provides gas, communications and a safety line, with options for a hot water hose for heating, a video cable and gas reclaim line. The diver may be deployed directly, often from a diving support vessel or indirectly via a diving bell. Surface-supplied divers almost always wear diving helmets or full face diving masks. The bottom mix can be air or mixed gas, the decompression mix nitrox or pure oxygen at 6m.[2] Decompression procedures include in-water decompression or surface decompression in a deck chamber.

A wet bell with a gas filled dome provides more comfort and control than a stage and allows for longer time in water. Wet bells are used for air and mixed gas, and divers can decompress on oxygen at 12 m.[2]

Small closed bell systems have been designed that can be easily mobilized, and include a two-man bell, a handling frame and a chamber for decompression after transfer under pressure (TUP). Divers can breathe air or mixed gas at the bottom but are usually recovered in the chamber filled with air. They decompress on oxygen supplied through built in breathing systems (BIBS) towards the end of the decompression. Small bell systems support bounce diving down to 120 m and for bottom times up to 2 hours.[2]

An alternative to scuba diving, called "SNUBA" or "hooka" diving, has the diver supplied via an umbilical from a small cylinder or compressor on the surface. It is popular for light work such as hull cleaning, and also as a tourist activity for those who are not scuba-certified.

Saturation diving lets professional divers live and work at depth for days or weeks at a time. This type of diving allows greater economy of work and enhanced safety. After working in the water, divers rest and live in a dry pressurized underwater habitat on the bottom or a system of pressure chambers on the deck of a diving support vessel, oil platform or other floating work station, in either case, the stay at the same pressure as the work depth. They may be transferred in a diving bell. Decompression at the end of the dive may take many days.

Underwater diver training is normally given by a qualified instructor who is a member of one of many diving training agencies or is registered with a government agency.

Basic diver training entails the learning of skills required for the safe conduct of activities in an underwater environment, such as the buddy system, dive planning, and use of dive tables.

Some of the skills which an entry level diver will normally learn include:

Other forms of underwater diving

Submarines, submersibles and 'hard' diving suits enable undersea diving to be carried out within a dry environment at normal atmospheric pressure, albeit more remotely. Underwater robots and remotely operated vehicles and also carry out some functions of divers at greater depths and in more dangerous environments. See also Sea Trek.

Diving by other animals

Humans are not the only air-breathing creatures to dive. Marine mammals such as seals, dolphins and whales, dive to feed and catch prey under the sea as do penguins and many seabirds, as well as various reptiles: turtles[3], saltwater crocodiles, seasnakes and Marine Iguanas. Many mammals, birds and reptiles also dive in freshwater rivers and lakes. A compilation of the diving records by several air-breathing animals can be found on the Penguiness Book page (http://penguinessbook.scarmarbin.be/).