1.a white crystalline peroxide used in bleaching (flour or oils or fats) and as a catalyst for free radical reactions

1.(MeSH)A peroxide derivative that has been used topically for BURNS and as a dermatologic agent in the treatment of ACNE and POISON IVY DERMATITIS. It is used also as a bleach in the food industry. 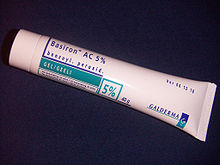 Tube of Basiron, a water-based 5% benzoyl peroxide preparation for the treatment of acne.

/ˈbɛnzɔɪl pəˈrɒksaɪd/) is an organic compound in the peroxide family. It consists of two benzoyl groups bridged by a peroxide link. Its structural formula is [C6H5C(O)]2O2. It is one of the most important organic peroxides in terms of applications and the scale of its production. Benzoyl peroxide is used as an acne treatment, for improving flour, for bleaching hair and teeth, for polymerising polyester and many other uses.

Benzoyl peroxide is included in the World Health Organization (WHO) Model Lists of Essential medicines, which is a list of minimum medical needs for a basic health care system.

Benzoyl peroxide was the first organic peroxide prepared by intentional synthesis. It was prepared by treating benzoyl chloride with barium peroxide,[1] a reaction that probably follows this stoichiometry:

The symbol • indicates that the products are radicals; i.e., they contain at least one unpaired electron. Such species are highly reactive. The homolysis is usually induced by heating. The half-life of benzoyl peroxide is one hour at 92 °C. At 131 °C, the half-life is one minute.[2]

Benzoyl peroxide breaks down in contact with skin, producing benzoic acid and oxygen, neither of which is significantly toxic.[3] It is important to note that the safety of the decomposition products does not mean that the substance itself is safe, as it is benzoyl peroxide's action as an oxidizing agent that is of importance. Hydrogen peroxide can be corrosive due to its oxidizing properties, but decomposes to form water and oxygen. Sodium hypochlorite (commonly known as "bleach") also shares these properties, but disproportionates to form harmless products such as sodium chloride.[citation needed]

Most benzoyl peroxide is used as a radical initiator to induce polymerizations.[4] Other major applications include its antiseptic and bleaching properties.

Benzoyl peroxide works as a peeling agent. It increases skin turnover, clearing pores and reducing the bacterial count (specifically P. acnes) as well as acting directly as an antimicrobial.[5] It may be combined with salicylic acid, sulfur, erythromycin or clindamycin (antibiotics), and adapalene (a synthetic retinoid). Two common combination drugs, include benzoyl peroxide/clindamycin and adapalene/benzoyl peroxide, a unique formulation considering most retinoids are deactivated by peroxides.

Benzoyl peroxide for acne treatment is typically applied to the affected areas in gel or cream form, in concentrations of 2.5% increasing through 5%, and up to 10%. Research suggests that 5% and 10% concentrations are not significantly more effective than 2.5%, while 2.5% is usually better tolerated, though the majority of major studies comparing it to other treatments use the higher concentrations.[6][7]

Benzoyl Peroxide commonly causes initial dryness and sometimes irritation, although the skin develops tolerance after a week or so. A small percentage of people are much more sensitive to it and liable to suffer burning, itching, peeling and possibly swelling. It is sensible to apply the lowest concentration and build up as appropriate. Once tolerance is achieved, increasing the quantity or concentration and gaining tolerance at a higher level may give better subsequent acne clearance.

Other common uses for benzoyl peroxide include dyeing hair, and as an active ingredient in teeth whitening systems. It is also used in the preparation of flour, and can be used as an initiator and catalyst for polyester thermoset resins (as an alternative to the much more hazardous methyl ethyl ketone peroxide).[citation needed]

In the U.S., the typical concentration for benzoyl peroxide is 2.5% to 10% for both prescription and over-the-counter drug preparations that are used in treatment for acne. Higher concentrations are used for hair bleach and teeth whitening. Benzoyl peroxide, like most peroxides, is a powerful bleaching agent. Contact with fabrics or hair can cause permanent color dampening almost immediately. Even secondary contact can cause bleaching. For example, contact with a towel that has been used to wash off benzoyl peroxide-containing hygiene products.[citation needed] In the paint industry, Benzoyl peroxide is used as a hardener in order to start the polymerization process in resins for instance PMMA resins can be polymerized with DiBenzoyl Peroxide.[8]

In a 1977 study using a human maximization test, 76% of subjects acquired a contact sensitization to benzoyl peroxide. Formulations of 5% and 10% were used.[9]

Unlike most organic compounds, benzoyl peroxide is potentially explosive,[10] and, hence, it can cause fires without external ignition. The hazard is acute for the pure material, and for this reason, the compound is generally used as a solution or a paste. For example, cosmetics contain only a few percent of benzoyl peroxide and, thus, pose virtually no explosion risk.