1.the first meal of the day (usually in the morning)

A sorry breakfast for my lord protector. Shak.

2. A meal after fasting, or food in general.

The wolves will get a breakfast by my death. Dryden.

First, sir, I read, and then I breakfast. Prior.

have breakfast, have lunch, lunch

↘ b and b, bed and breakfast


For other uses, see Breakfast (disambiguation).

Breakfast (literally meaning "breaking the fast" of the night) is the first meal taken after rising from a night's sleep, most often eaten in the early morning before undertaking the day's work.[1] Among English speakers, "breakfast" can be used to refer to this meal, or, less commonly, to refer to a meal composed of traditional breakfast foods (eggs, oatmeal, sausages, etc.) served at any time of day.

Breakfast foods vary widely from place to place, but often include a carbohydrate such as grains or cereals, fruit and/or vegetable, a protein food such as eggs, meat or fish, and a beverage such as tea, coffee or fruit juice. Coffee, tea, juice, breakfast cereals, pancakes, sausages, bacon, sweet breads, fresh fruit, vegetables, eggs, mushrooms, black pudding, baked beans, muffins, crumpets and toast with butter or margarine and/or jam or marmalade are common examples of breakfast foods, though a large range of preparations and ingredients are associated with breakfast globally.[2]

Nutritional experts have referred to breakfast as the most important meal of the day, citing studies that find that people who skip breakfast are disproportionately likely to have problems with concentration, metabolism, and weight.[3][4] 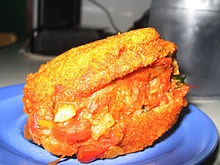 Breakfast in Africa varies greatly from region to region.[5]

Nigeria has over 250 different ethnic groups,[6] with a corresponding variety of cuisines. For the Hausa of northern Nigeria, a typical breakfast consists of kosai (cakes made from ground beans which are then fried) or funkaso (wheat flour soaked for a day then fried and served with sugar). Both of these cakes can be served with porridge and sugar known as koko. For the south western Yoruba people (Ilé Yorùbá) one of the most common breakfasts is (ounjẹ árọ) is Ògì— a porridge made from corn, usually served with evaporated milk. Ògì is eaten with Acarajé (akara) or Moi moi.[7] Both are made from ground bean paste; akara is fried in oil, and moi moi is wrapped in leaves or foil and then steamed. Ògì can also be steamed in leaves to harden it and eaten with akara or moi moi for breakfast. English tea or malta is served as a breakfast drink. Another popular option in southwest Nigeria is Gari, which is eaten like a cereal. Gari, known in Brazil as farofa, is made from the root of cassava. For breakfast, it is soaked in water and sweetened with sugar.[8]

Breakfast typically includes coffee, with dried milk and abundant sugar, accompanied by baguette[9] with various spreads: Chocoleca, a Nutella equivalent made from peanuts; butter; or processed mild cheese. Fresh fruit, including mangoes and bananas, is often also part of a simple breakfast.[citation needed] 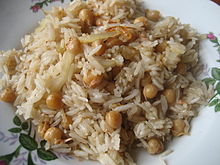 htamin jaw - leftover or cold rice fried with onions and boiled peas from a streethawker is quick and popular.

In Burma, the traditional breakfast in town and country alike is htamin jaw, fried rice with boiled peas (pè byouk), and yei nway jan (green tea) especially among the poor.[10]

Glutinous rice or kao hnyin is a popular alternative, steamed wrapped in banana leaf often with peas as kao hnyin baung served with a sprinkle of crushed and salted toasted sesame.[10] Equally popular is the purple variety known as nga cheik cooked the same way and called nga cheik paung. Si damin is sticky rice cooked with turmeric and onions in peanut oil and served with crushed and salted toasted sesame and crispfried onions. Assorted fritters such as baya jaw (urad dal) go with all of them.

Fried chapati, blistered like nan bya but crispy, with pè byouk and crispy fried onions is a popular alternative.[11]

Htat ta ya, lit. "a hundred layers", is flaky multilayered fried paratha served with either pè byouk or a sprinkle of sugar.[12]

Eeja gway (Chinese-style fried breadsticks or youtiao) with Indian tea or coffee is another favourite.[10]

Another dish, growing in popularity because of its healthier composite and economic friendliness, is the Rakhine Mont-de, a variant of Mohinga, but lighter. It consists of thin rice noodles eaten with clear soup, made from boiled ngapi and lemon grass. Toasted fish flakes, from snakefish and green and red chili paste are also added, with seasoning. Rakhine Mont-de is also called ar-pu-shar-pu (literally "hot throat", "hot tongue") because of its heavy use of spicy ingredients. A salad version also exists. It is now available in many cities and towns across Burma.[citation needed]

A complete traditional Japanese kaiseki breakfast at a ryokan in Kyoto.

The normative Japanese breakfast consists of steamed white rice, a bowl of miso soup, and Japanese styled pickles (like takuan or umeboshi ).[14][15] A raw egg and nori are often served.[14] Raw egg is to be beaten in a small bowl and to be poured on the hot rice,[14] to make golden colored tamago kake gohan. Nori, sheets of dried laver, is to wrap rice.[14] It includes often a slice of grilled fish.[14] We must not forget some Japanese tea (green tea).[15]

Western styled breakfasts in Japanese households are similar to those in the U.S. Japanese children often eat cornflakes and drink milk, hot chocolate or fruit juice. Japanese adults (especially younger ones) tend to have toast with butter or jam, eggs, and slices of vegetables. They often drink coffee or orange juice.[14]

In the United Kingdom, the classic breakfast has been the "full English breakfast", which involves fried egg, scrambled egg or poached egg with bacon and sausages, usually with mushrooms, tomatoes, fried bread, black and/or white pudding, and toast, however in present times this is now eaten more often reserved for weekends, holidays, or eaten away from home in so-called 'greasy spoon' venues due to the time required to prepare all the ingredients. Toast with marmalade , jam (fruit conserves) or the savoury spread Marmite, or breakfast cereals with milk are now much more common daily breakfasts, with yoghurt and muesli also popular.[citation needed] Before the arrival of American-style breakfast cerals, dried bread soaked in hot milk or tea and porridge (boiled oats) was the common daily breakfast, while leftover vegetables (namely cabbage) and potatoes that hadn't been eaten the night before were often served re-fried; which became 'bubble-and-squeak'.[citation needed] Traditionally, breakfast would be served with a small amount of fruit, such as a slice of orange, believed to prevent the onset of scurvy.[16] Also traditional, but now less popular breakfasts included fish in the form of kippers (smoked herring) with poached egg and toast, and kedgeree, ( a smoked haddock, egg and rice dish originating in Colonial India). Most British breakfasts are consumed with tea (white - with milk), coffee or fruit juice.[citation needed]

A typical breakfast in Denmark consists of breakfast cereals or bread, bread rolls (rundstykker), cheeses, fruit preserves (marmelade, usually made from berries or citrus fruits) and other toppings, accompanied by skimmed milk, tea or coffee. Oat meal, cereals, youghurt and øllebrød, are also popular options. Weekends or festive occasions may call for Danish pastries (wienerbrød) or a bitters, such as Gammel Dansk.[17]

Home breakfasts in Greece include bread with butter, honey or marmalade with coffee or milk. Breakfast cereals are also eaten. Children also eat nutella type cream on bread. No breakfast at all is common.[18] Various kinds of savoury pastry (Tyropita, spanakopita, and bougatsa) are eaten for breakfast in some areas of Northern Greece, also by those eating out, usually accompanied with Greek coffee or Frappé coffee.[citation needed]

Traditional Greek breakfast (hot milk, fresh bread, butter and honey, or yoghurt) was also available in special "milk shops" (in Greek Galaktopoleia – Γαλακτοπωλεία γαλακτοπωλείο). Milk shops were phased out between 1970 and 1990 – there are very few left, one is in Athens[19] and some in small towns.

A continental breakfast consists of slices of cheese and cold meat, often with a croissant or bread roll, and an accompaniment of coffee. Although this is the traditional breakfast of mainland Europe, these breakfasts are quite popular in the United Kingdom.[20] Continental breakfasts may feature other starchy foods, such as pastries.[21] This type of breakfast is often complimentary at hotels in North America.[citation needed]

Breakfast in urban areas traditionally consisted of café con leche that was sweetened and included a pinch of salt. Toasted buttered Cuban bread, cut into lengths, was dunked in the coffee. In rural Cuba, farmers ate roasted pork, beans and white rice, café con leche and cuajada sweetened with caramel.[22] 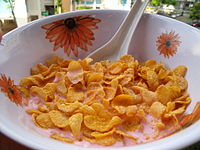 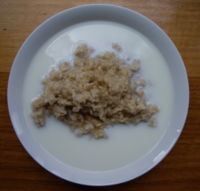 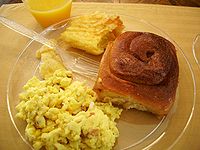 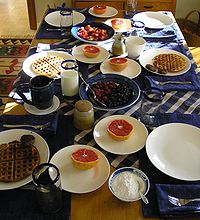 An example of a country breakfast in U.S. This includes waffles with fruit and sausage patties. 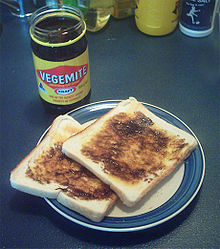 Prior to the Second World War and the widespread adoption of household refrigerators, the traditional Australian breakfast consisted of grilled steaks and fried eggs, mainly because of the ready availability of beefsteak during that period. While very few Australians today would recall this breakfast format, the steak-and-eggs breakfast has survived as the customary pre-landing breakfast of the United States Marine Corps, due to the Marines having copied it from Australian soldiers when the two countries campaigned together during the Pacific War.[23][24]

The majority of urban Australians eat a cold commercially prepared cereal with pasteurised milk or yoghurt and/or toast with preserves such as marmalade or vegemite[25] for breakfast.[26] Two of the most common cereals are cornflakes and a type of biscuit made from wheat, called Weet-bix. Fruit is also common at breakfast, either on the cereal or eaten separately. This weekday morning meal is often eaten "on the run" which means either in the kitchen or while getting ready for the day's activities, and children often skip breakfast.[27] While not unusual, a cooked breakfast is more likely to be eaten in the weekends or on special occasions either at home or at a cafe.[28] A cooked breakfast is usually egg based, but may also include sausage, bacon, breakfast steaks, mushrooms, tomato, hash browns and pancakes, similar to the British cooked breakfast but perhaps more like the American. Breakfast habits differ more between age groups than between cities.[27] Black tea prepared with milk is a typical drink served with the Australian "brekkie" or freshly brewed coffee rather than instant as in the UK, but other beverages are common too, such as juice.[citation needed]

Breakfast in New Zealand is very similar to the Australian breakfast, cornflakes or Weet-bix which is often served with added sugar and milk. The range of processed breakfast cereals is vast and children are more likely to eat those that contain added sugar.[29] New Zealanders, particularly in winter, are likely to eat a hot oat cereal called "porridge". Porridge is typically served with milk, brown sugar, fruit and/or yoghurt. Sliced bread which has been toasted and topped with preserves or spreads is a common alternative breakfast. Eating breakfast at a restaurant was unheard of until the 1990's, however cafes which serve breakfast until midday or all day are now common.[30] The Big Breakfast is the main item at cafes, which is similar to the British Cooked Breakfast, except that it seldom includes black pudding. Other common menu items are: eggs done how you like, eggs benedict, beans on toast, pancakes, cereal and yoghurt, and smoothies. Breakfast nearly always includes coffee, tea or both, with children drinking milk either on their cereal, in a glass or hot milo. Recent concern has been raised about the cost of milk and some families being unable to afford it.[31]

In the United States, 65% of coffee is drunk during breakfast hours.[32]