1.a tower that supports or shelters a bell

2.a tower with a large clock visible high up on an outside face


This is an article on clock towers. For the video game series see Clock Tower (series).
For the UAE roundabout, see Deira Clocktower. 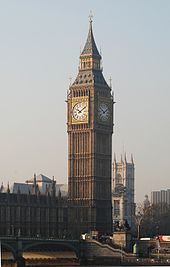 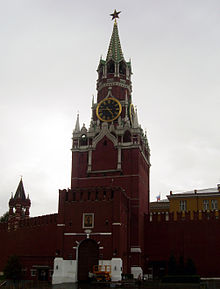 A clock tower is a tower specifically built with one or more (often four) clock faces. Clock towers can be either freestanding or part of a church or municipal building such as a town hall.

The mechanism inside the tower is known as a turret clock. It often marks the hour (and sometimes segments of an hour) by sounding large bells or chimes, sometimes playing simple musical phrases or tunes. 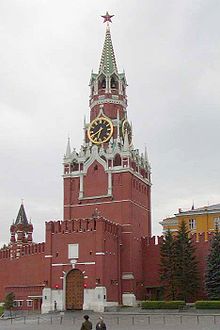 Kremlin Clock on the Spasskaya Tower of the Moscow Kremlin.

Some clocks towers are famously known landmarks. Five of the best-known are the Clock Tower, Palace of Westminster, which houses the Great Bell (generally known as Big Ben) in London, the Rajabai Tower in Mumbai, the Spasskaya Tower of the Moscow Kremlin, the Torre dell'Orologio in the Piazza San Marco in Venice, Italy, and Zytglogge clock tower in the Old city of Bern, Switzerland.[1] The Royal Mecca Clock Tower in Saudi Arabia is the largest clock tower in the world.[2] 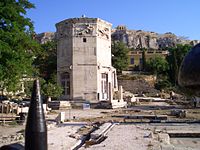 Tower of the Winds in Athens

Although clock towers are today mostly admired for their aesthetics, they once served an important purpose. Before the middle of the twentieth century, most people did not have watches, and prior to the 18th century even home clocks were rare. The first clocks didn't have faces, but were solely striking clocks, which sounded bells to call the surrounding community to work or to prayer. They were therefore placed in towers so the bells would be audible for a long distance. Clock towers were placed near the centres of towns and were often the tallest structures there. As clock towers became more common, the designers realized that a dial on the outside of the tower would allow the townspeople to read the time whenever they wanted.

The use of clock towers dates back to the antiquity. The earliest clock tower was the Tower of the Winds in Athens which featured eight sundials. In its interior, there was also a water clock (or clepsydra), driven by water coming down from the Acropolis.[4] In Song China, an astronomical clock tower was designed by Su Song and erected at Kaifeng in 1088, featuring a liquid escapement mechanism. In England, a clock was put up in a clock tower, the medieval precursor to Big Ben, at Westminster, in 1288;[5][6] and in 1292 a clock was put up in Canterbury Cathedral.[5] The oldest surviving clock tower in Europe is the Salisbury cathedral clock, completed in 1306; and another clock put up at St. Albans, in 1326, 'showed various astronomical phenomena'.[5]

JB Joyce & Co claims to be the world's oldest tower clock maker (still in operation).[7] The company began life in 1690 and still manufactures clocks not far from its original premises in Whitchurch, Shropshire. Today it is a part of the Smith of Derby Group started in 1856, who hold the Guinness world record for creating the world's largest pendulum-regulated clock,[8] the Harmony Clock Tower in Ganzhou. The company has manufactured tower clocks for St Paul's Cathedral in London and the Shanghai Customs building in China. 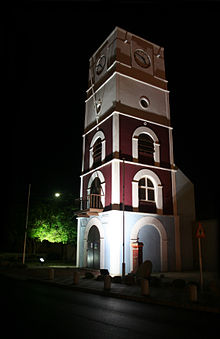 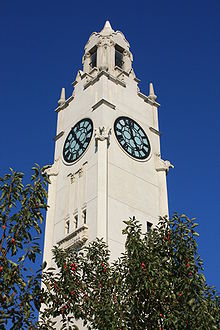 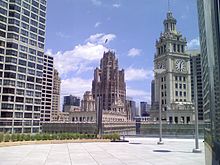 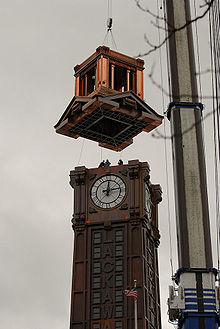 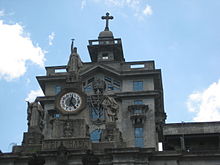 Main Building of the University of Santo Tomas, Manila 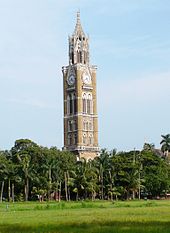 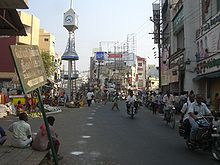 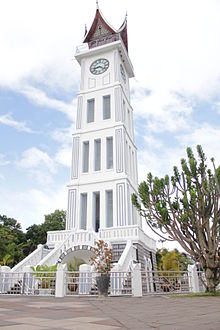 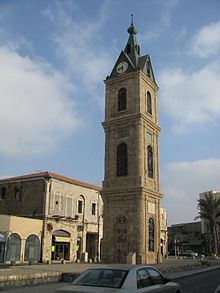 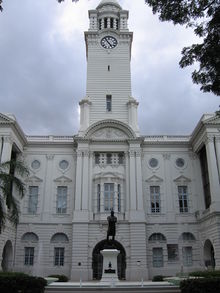 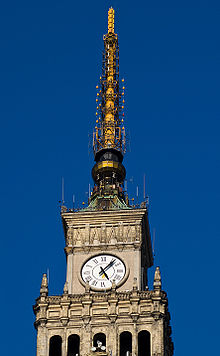 On New Year's Eve 2004 four 6.3-metre clock faces were added to the top of the Warsaw Palace of Culture and Science building in Warsaw, Poland. This building is 231 m (757 ft) tall and is the second tallest clock tower in the world .[3] 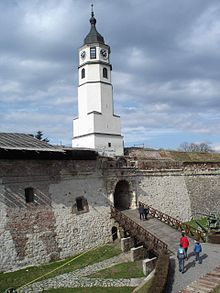 The Clock Gate or Sahat Kula (Сахат кула) (clock tower) at the fortress wall of the Belgrade Fortress, Belgrade, Serbia.