1.tightly stretched rope or wire on which acrobats perform high above the ground

2.stringed instruments that are played with a bow"the strings played superlatively well"

3.a necklace made by a stringing objects together"a string of beads" "a strand of pearls" ;

4.a tie consisting of a cord that goes through a seam around an opening"he pulled the drawstring and closed the bag"

6.a tightly stretched cord of wire or gut, which makes sound when plucked, struck, or bowed

7.a collection of objects threaded on a single strand

8.a linear sequence of symbols (characters or words or phrases)

9.a sequentially ordered set of things or events or ideas in which each successive member is related to the preceding"a string of islands" "train of mourners" "a train of thought"

11.(cosmology) a hypothetical one-dimensional subatomic particle having a concentration of energy and the dynamic properties of a flexible loop

12.a tough piece of fiber in vegetables, meat, or other food (especially the tough fibers connecting the two halves of a bean pod)

13.any of the vascular bundles or ribs that form the branching framework of conducting and supporting tissues in a leaf or other plant organ

1.add as if on a string"string these ideas together" "string up these songs and you'll have a musical"

2.provide with strings"string my guitar"

5.string together; tie or fasten with a string"string the package"

7.move or come along

StringString (strĭng), n. [OE. string, streng, AS. streng; akin to D. streng, G. strang, Icel. strengr, Sw. sträng, Dan. stræng; probably from the adj., E. strong (see Strong); or perhaps originally meaning, twisted, and akin to E. strangle.]
1. A small cord, a line, a twine, or a slender strip of leather, or other substance, used for binding together, fastening, or tying things; a cord, larger than a thread and smaller than a rope; as, a shoe string; a bonnet string; a silken string. Shak.

Round Ormond's knee thou tiest the mystic string. Prior.

3. A strip, as of leather, by which the covers of a book are held together. Milton.

Me softer airs befit, and softer strings
Of lute, or viol still. Milton.

He twangs the grieving string. Pope.

Duckweed putteth forth a little string into the water, from the bottom. Bacon.

7. A nerve or tendon of an animal body.

The string of his tongue was loosed. Mark vii. 35.

8. (Shipbuilding) An inside range of ceiling planks, corresponding to the sheer strake on the outside and bolted to it.

9. (Bot.) The tough fibrous substance that unites the valves of the pericap of leguminous plants, and which is readily pulled off; as, the strings of beans.

10. (Mining) A small, filamentous ramification of a metallic vein. Ure.

13. (a) In various indoor games, a score or tally, sometimes, as in American billiard games, marked by buttons threaded on a string or wire. (b) In various games, competitions, etc., a certain number of turns at play, of rounds, etc.

14. (Billiards & Pool) (a) The line from behind and over which the cue ball must be played after being out of play as by being pocketed or knocked off the table; -- called also string line. (b) Act of stringing for break.

16. a sequence of similar objects or events sufficiently close in time or space to be perceived as a group; a string of accidents; a string of restaurants on a highway.

17. (Physics) A one-dimensional string-like mathematical object used as a means of representing the properties of fundamental particles in string theory, one theory of particle physics; such hypothetical objects are one-dimensional and very small (10-33 cm) but exist in more than four spatial dimensions, and have various modes of vibration. Considering particles as strings avoids some of the problems of treating particles as points, and allows a unified treatment of gravity along with the other three forces (electromagnetism, the weak force, and the strong force) in a manner consistent with quantum mechanics. See also string theory.

String band (Mus.), a band of musicians using only, or chiefly, stringed instruments. -- String beans. (a) A dish prepared from the unripe pods of several kinds of beans; -- so called because the strings are stripped off. (b) Any kind of beans in which the pods are used for cooking before the seeds are ripe; usually, the low bush bean. -- To have two strings to one's bow, to have a means or expedient in reserve in case the one employed fails.

Has not wise nature strung the legs and feet
With firmest nerves, designed to walk the street? Gay.

2. To put in tune the strings of, as a stringed instrument, in order to play upon it.

For here the Muse so oft her harp has strung,
That not a mountain rears its head unsung. Addison.

4. To make tense; to strengthen.

Toil strung the nerves, and purified the blood. Dryden.

6. To hoax; josh; jolly; often used with along; as, we strung him along all day until he realized we were kidding. [Slang]

StringString, v. i. To form into a string or strings, as a substance which is stretched, or people who are moving along, etc.

draw, string along, string together, string up, thread, thread together

arrange, draw up, set up, sort[Hyper.]

arrange, draw up, set up, sort[Hyper.]

advance, bear down on, come up to, come up towards, go forward, go on, make for, march on, move on, pass on, progress[Hyper.] 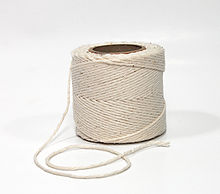 A spool of string

String is a flexible piece of rope or twine which is used to tie, bind, or hang other objects.

Examples of string use include:

String or strings may also refer to: