1.a writ issued by court authority to compel the attendance of a witness at a judicial proceeding; disobedience may be punishable as a contempt of court

1.(jurisprudence)serve or summon with a subpoena"The witness and her records were subpoenaed"

SubpœnaSub*pœ"na (?), n. [NL., fr. L. sub under + poena punishment. See Pain.] (Law) A writ commanding the attendance in court, as a witness, of the person on whom it is served, under a penalty; the process by which a defendant in equity is commanded to appear and answer the plaintiff's bill. [Written also subpena.]

have up, summon  (jurisprudence)

/səˈpiːnə/ is a writ by a government agency, most often a court, that has authority to compel testimony by a witness or production of evidence under a penalty for failure. There are two common types of subpoena: 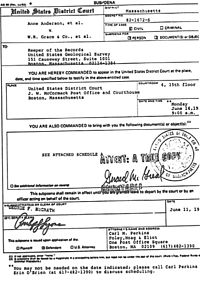 The term is from the Middle English suppena and the Latin phrase sub poena meaning "under penalty".[2] The term may also be spelled "subpena".[3] The subpoena has its source in English common law and it is now used almost with universal application throughout the English common law world. However, for civil proceedings in England and Wales, it is now described as a witness summons, as part of reforms to replace Latin terms with English terms which are easier to understand. John Waltham, Bishop of Salisbury, is said to have created the writ of subpoena in the reign of Richard II.[4]

Subpoenas are usually issued by the clerk of the court (see below) in the name of the judge presiding over the case. Additionally, court rules may permit lawyers to issue subpoenas themselves in their capacity as officers of the court.  Typically subpoenas are issued "in blank" and it is the responsibility of the lawyer representing the plaintiff or defendant on whose behalf the testimony is to be given to serve the subpoena on the witness. If a witness is reluctant to testify, then the personal service of subpoena is usually required with proof of service by non-party server.

The subpoena will usually be on the letterhead of the court where the case is filed, name the parties to the case, and be addressed by name to the person whose testimony is being sought. It will contain the language "You are hereby commanded to report in person to the clerk of this court" or similar, describing the specific location, scheduled date and time of the appearance. Some issuing jurisdictions include an admonishment advising the subject of the criminal penalty for failure to comply with a subpoena, and reminding him or her not to leave the court facilities until excused by a competent authority. In some situations the person is paid.

Pro se litigants who represent themselves, unlike lawyers, must ask a court clerk to officially issue them subpoena forms when they need to call witnesses by phone or in person, or when they need to officially request documents to be sent to them and/or directly to court.[5] Any documents that have not been subpoenaed to court or verified by a witness may be dismissed by the opposite party as hearsay, unless excepted by hearsay rules or permitted by judge. If the witness is called via long-distance phone call, then the requesting party is responsible for initiating the call and providing a payment with a prepaid phone card.

Some states (as is the case in Florida) require the subpoenaing party to first file a Notice of Intent to Serve Subpoena, or a Notice of Production from Non-Party 10 days prior to issuing the subpoena, so that the other party may have ample time to file any objections.

Also, the party being subpoenaed has the right to object to the issuance of the subpoena, if it is for an improper purpose, such as subpoenaing records that have no relevance to the proceedings or of persons who would have no evidence to present.