1.the local time at the 0 meridian passing through Greenwich, England; it is the same everywhere

Universal Time (UT) is a time scale based on the rotation of the Earth. It is a modern continuation of Greenwich Mean Time (GMT), i.e., the mean solar time on the Prime Meridian at Greenwich, and GMT is sometimes used loosely as a synonym for UTC. In fact, the expression "Universal Time" is ambiguous, as there are several versions of it, the most commonly used being UTC and UT1 (see below). All of these versions of UT are based on the rotation of the Earth in relation to distant celestial objects (stars and quasars), but with a scaling factor and other adjustments to make them closer to solar time.

Prior to the introduction of standard time, each municipality around the civilized world set its official clock, if it had one, according to the local position of the Sun (see solar time). This served adequately until the introduction of the steam engine, the telegraph, and rail travel, which made it possible to travel fast enough over long distances to require almost constant re-setting of timepieces as a train progressed in its daily run through several towns. Standard time, where all clocks in a large region are set to the same time, was established to solve this problem. Chronometers or telegraphy were used to synchronize these clocks. 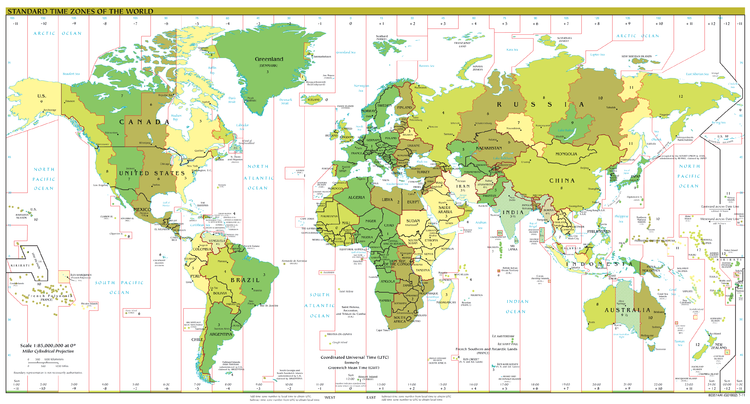 Standard time zones of the world since September 20, 2011. Instructions for converting UTC to or from local times are on the bottom.

Standard time, as originally proposed by Sir Sandford Fleming in 1879, divided the world into twenty-four time zones, each one covering 15 degrees of longitude. All clocks within each zone would be set to the same time as the others, but differed by one hour from those in the neighboring zones. The local time at the Royal Greenwich Observatory in Greenwich, England was chosen as standard at the 1884 International Meridian Conference, leading to the widespread use of Greenwich Mean Time to set local clocks. This location was chosen because by 1884 two-thirds of all charts and maps already used it as their prime meridian. The conference did not adopt Fleming's time zones because they were outside the purpose for which it was called, which was to choose a prime meridian. Nevertheless, by 1929 all major countries had adopted standard time zones. Political considerations[clarification needed] have now increased the number of standard time zones to 40.

Time can be measured based on the rotation of the Earth by observing celestial bodies crossing the meridian every day. Astronomers found that it was more accurate to establish time by observing stars as they crossed a meridian rather than by observing the position of the Sun in the sky. Nowadays, UT in relation to International Atomic Time (TAI) is determined by Very Long Baseline Interferometry (VLBI) observations of distant quasars, a method which has an accuracy of microseconds. Most sources of time and celestial coordinate system standards use UT1 as the default meaning of UT, though occasionally UTC may be implied.

The rotation of the Earth is somewhat irregular, and is very gradually slowing due to tidal acceleration. Furthermore, the length of the second was determined from observations of the Moon between 1750 and 1890. All of these factors cause the mean solar day, on the average, to be slightly longer than the nominal 86,400 SI seconds, the traditional number of seconds per day. As UT is slightly irregular in its rate, astronomers introduced Ephemeris Time, which has since been replaced by Terrestrial Time (TT). However, because Universal Time is synchronous with night and day, and more precise atomic-frequency standards drift away from this, UT is still used to produce a correction (called a leap second) to atomic time, in order to obtain a broadcast form of civil time that carries atomic frequency. Thus, civil broadcast standards for time and frequency usually follow TAI closely, but occasionally change discontinuously (or "leap") in order to prevent them from drifting too far from mean solar time.

Barycentric Dynamical Time (TDB), a form of atomic time, is now used in the construction of the ephemerides of the planets and other solar system objects, for two main reasons. First, these ephemerides are tied to optical and radar observations of planetary motion, and the TDB time scale is fitted so that Newton's laws of motion, with corrections for general relativity, are followed. Next, the time scales based on Earth's rotation are not uniform and therefore are not suitable for predicting the motion of bodies in our solar system.

There are several versions of Universal Time:

where t is the time as fraction of the Besselian year.[3]